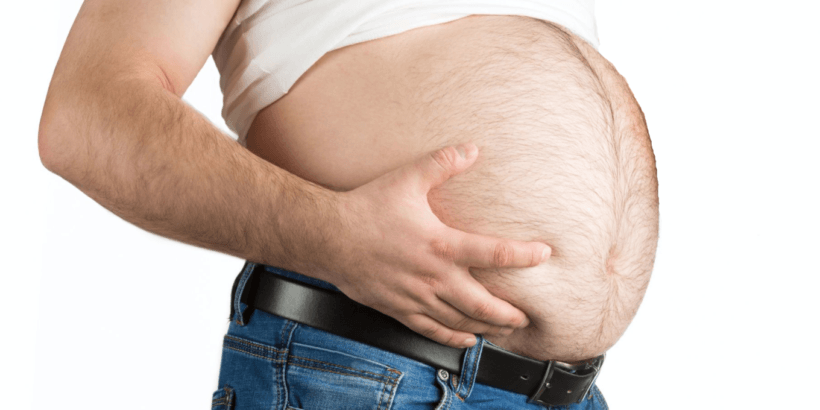 Recently in the gym:

She (super athletic & super slim): “Look, I think that my belly has become thicker. I don’t understand, how can that be?”

He (super athletic & super slim, rolling his eyes): “There is nothing, you don’t have a big belly! You know what? I think it only looks like that to you because you look down at it from above. And then the little bit optically sticks out.”

She: “Hmmm you think?” (Looks doubtfully down on herself.) “Well, right, there’s no flab on the sides anymore – It’s only the belly in the centre.”

He: “Look, I’ve got a belly like that too. And neither of us is fat. Hey, you really can’t exercise more than we do!”

A third person – a woman I know well, she is one of my participants, very active, a doctor – comes into the room, listens for a moment, looks at the stomachs and then says: “Do you talk a lot while eating?”

They look at each other.
She: “Ööööhmmm I’m always talking.” (All chuckling.)

“I thought so. When you talk a lot during a meal, you really swallow a lot of air. Try to talk just between bites, you probably just have air in your stomach.”

I couldn’t help hearing this conversation and I got curious. So you swallow air when you talk while eating? Unfortunately, I have that habit too. Not for nothing does our head coach always say that the “Attackers” all have the same “hectic” way of speaking.

But I drift off – my workmate and I of course had to try it right at the next lunch. Here our first impressions:

However, of course I was not satisfied with this, but have also done some research.

Here are the facts:

It is completely normal to swallow a bit of air while eating or talking, this is unavoidable and usually has no negative influence on our well-being.

It only becomes problematic when a lot of air is swallowed: This can have effects as described above (“bloated belly”) as well as lead to constant belching, flatulence and also quite severe stomach aches and cramps. A feeling of fullness and reflux (reflux of stomach contents in the direction of the esophagus) can also be the result. In the worst case, the air in the digestive tract presses against the other organs and the affected person may even suffer from breathing difficulties.

This syndrome is called aerophagy (Latin for “air eating”) and has its causes, for example, in speaking too quickly, eating and drinking too hastily and consuming carbonated drinks. Aerophagy can also have psychological causes: Internal dissatisfaction, stress and nervousness can lead to a vicious circle. In addition, certain foods (e.g. sugar, yeast products but also certain legumes or onions) can lead to gas formation in the digestive tract.
At the latest when the aerophagy becomes chronic and the symptoms permanent, a doctor should be consulted, as serious digestive disorders can develop.

As far as the story with the bellies is concerned, we can’t say much about that at the moment. But to be honest – I can really imagine more beautiful things than this aerophagy. Do we want to have that? NO – and the pros from the self-test also show that somehow it is much nicer not to talk (too much) while chewing.

So FIBEEER your next meal in a completely etiquette-conform way, as we all know: “You don’t talk with a full mouth!” 😉